May 8th 2020. Today is a very sad day for myself and many as Roy Horn from Siegfried and Roy has passed away after catching COVID. There is a beautiful show that ABC’s 20/20 produced; they were not only outstanding performers but great human beings from which you can learn a lot. The link to the whole show is HERE.

We will return to our conversation regarding “Below the Deck”, but at this moment I wanted to share 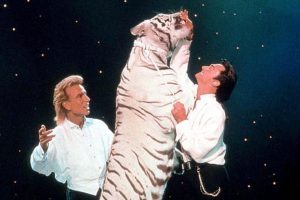 something of great importance with you. According to various people, Mantecore, the 400 Lb Siberian Tiger had attacked Roy on stage. That is what people thought, but most of them were not big cat trainers, they were audience members. Roy had a different position. He had stated that he had a mini-stroke that the cat detected; as Roy fell on stage. In an effort to aid Roy, Mantecore had grabbed Roy by the scruff of the neck and took him off-stage to what Montecore thought was safety.

Regardless of whether you believe the mini-stroke version or not (there will always be doubters); what the tiger did was what a tiger would do with a cub in danger, take the cub to safety by the scruff of the neck. A little known fact is that the very act of lifting a cub by the neck induces relaxation; it paralyzes the cub and causes the body to go limp. Regardless of why it happened, this was clearly not an attack. Roy was not mauled. He was not viciously attacked; he was simply carried off the stage by the scruff of his neck. What Montecore did not know was that humans’ necks are not built for that; how would he know?

During the 20/20 show, he was repeatedly asked whether this action would affect how we would feel about animals, or whether he would be any less comfortable about having that close intimacy and relationship to the big cats. She asked him if he was ever for a moment less at ease and whether that changed at all. For the third time, she is now telling him, not asking him that it would be human nature, when to have an experience such as this where he should have moments where he feels differently of anxious about being around them; for the third time she asks “you’ve never had that”? It was then I decided I had to write a blog post about this.

Although a wonderful lady, and extremely well-spoken and professional reporter, Elizabeth Vargas demonstrated a fault: her human nature. I want you to avoid this like the plague.

She almost seemed to be in disbelief that Roy was not affected by the encounter with Mantecore on October 3rd, 2003.This is a big problem people face in relationships. Something happens once and the other person attributes this to regular behavior. This is one of the killers of a relationship. 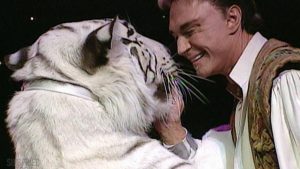 We, all of us will make mistakes. There are two concepts to consider here. One, the fact that if someone made a mistake, whatever it may be, it doesn’t mean he or she will repeat it on a regular basis.  You have to ascertain your mate’s position with respect to that. Second, perspective. Montecore thought he was doing the right thing. In fact, you can feel comfortable that this was the case. When, after the injury, Siegfried and Roy had one last show, only Mantecore was on stage, no other cat. As you know, a lot of rehearsal is required. If Roy thought it was less than an accident would he have rehearsed with Mantecore? He kept the animal for at least 6 more years. Likewise, maybe, just maybe what your mate is telling you is true, not just an excuse. Don’t go knocking the person because you choose to believe otherwise (unless this person is a perpetual liar, then they make it hard to believe them). However, if it is the first time something happened that hasn’t happened before, do not ruin your relationship over a mistake; you could live to regret it as many people I have counseled have. That’s it. A long explanation but it is easier to remember this way.

Let me leave you with a beautiful thought:

As Siegfried stated during their final performance…” look for the magic that is around you; in nature, plants, flowers, and all the animals which we share this planet with. Look for it, and let it enlighten your heart and your life”.

Relationship Conversations That Surprise You; 3 Dangerous Examples
May 22, 2022

Last Minute Cancellation: 4 Questions Can Predict The Future
May 25, 2020

5 Ways to Discover The Most Important Person in Your Life during COVID
May 24, 2020

This site uses Akismet to reduce spam. Learn how your comment data is processed.